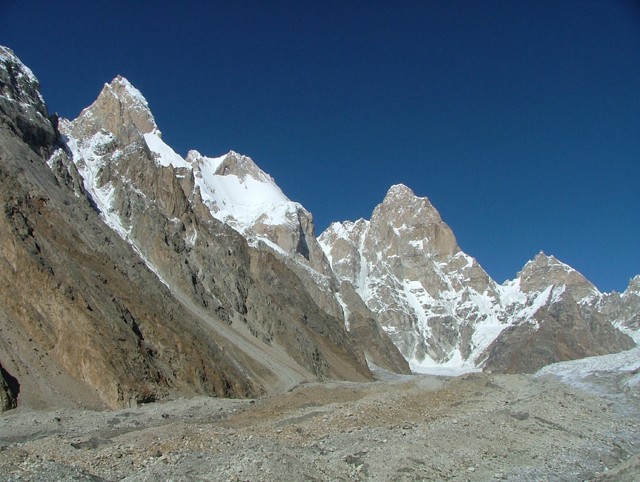 We were only two people leaving France in August, but with a really common objective: climbing Latok 3. In Islamabad we met the agency’s boss Ishaq and his team, who were really nice to us. The next day we flight to Skardu and met Ali: our cook (and much more...) for the trip. Two more days on a tricky road were needed to arrive in Askole, start of the most classical treks on Baltoro glacier. Then we walked three on Biaffo glacier and its moraines to ridge our base camp at 4500m, in front of our mountain!

We acclimated first on Latok 5 (6200m) but couldn’t go to summit because of bad weather; we had to stop at 5400m after having climbed a nice mixed ridge. Then our weather forecast man in France told us we might have a perfect week without wind. So despite our bad acclimate we decided to try our chance, leaving with heavy backpacks including 6 days of food. After five days of a tiring but so gorgeous and complete ascent, we were standing on top of Latok 3, with the five Pakistani “8000m” in front of us. After 2 days abseiling, we were back to base camp and we moved fast to Hunza valley (Ali’s area) to spend a relaxing holiday week.